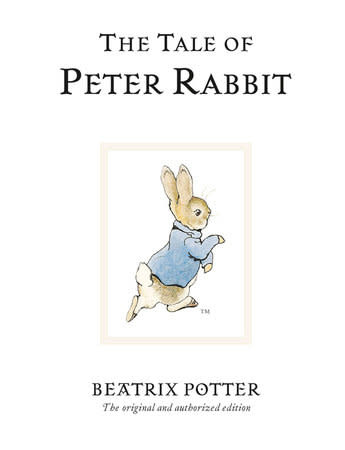 The Tale of Peter Rabbit

"Now, my dears," said old Mrs. Rabbit one morning, "you may go into the fields or down the lane, but don't go into Mr. McGregor's garden."...Read more

The Tale of Peter Rabbit is the original classic by Beatrix Potter. The Tale of Peter Rabbit was first published by Frederick Warne in 1902 and endures as Beatrix Potter's most popular and well-loved tale. It tells the story of a very mischievous rabbit and the trouble he encounters in Mr McGregor's vegetable garden! Re-originated in 2002 to mark the centenary of publication bringing it closer to the original edition, six illustrations were restored, four that were removed in 1903 to make room for endpapers and two that have never been used before, Beatrix having initially prepared more illustrations than could be accommodated in the original format. Beatrix Potter is regarded as one of the world's best-loved children's  authors of all time. From her first book, The Tale of Peter Rabbit, published by Frederick Warne in 1902, she went on to create a series of stories based around animal characters including Mrs. Tiggy-winkle, Benjamin Bunny, Jemima Puddle-duck, Mr. Jeremy Fisher and Tom Kitten. Her humorous, lively tales and beautiful illustrations have become a natural part of childhood. With revenue from the sales of her books, Beatrix Potter bought a farm - Hill Top - in the English Lake District, where she later became a farmer and prize-winning sheep breeder. She launched the now vast merchandise programme by patenting the very first Peter Rabbit doll in 1903. The product range continues to grow today with licences around the world including baby clothing and bedding, nursery decor products and collectables. Upon her death, Beatrix Potter left 14 farms and over 4000 acres of Lake District farmland to the National Trust so that the place that she loved would remain undeveloped and protected for future generations to enjoy.

Peter Rabbit -Jack in the Box